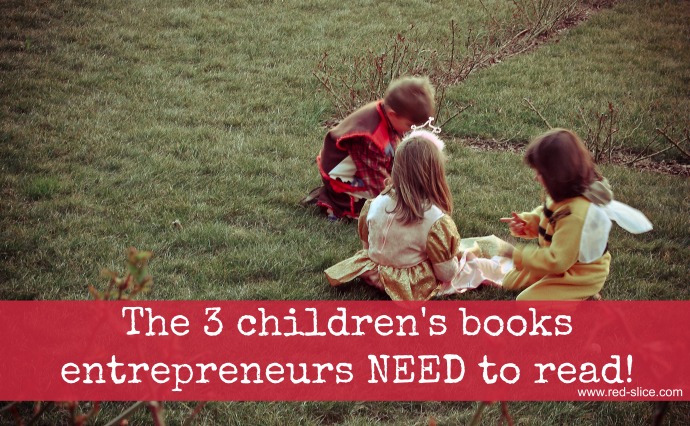 As I snuggle with my three year-old son at bedtime, it’s fascinating to me the lessons he’s already learning about life from these charming books.

Lessons all of us entrepreneurs need more often than we think.

Lessons on resilience, taking action, understanding that things won’t always go smoothly. Lessons on failing over and over again yet still not letting go of your dreams.

Here are three wonderful children’s books you should add to your business library, whether you have kids or not!

This one may seem like a “Duh” selection, but have you ever actually read the words with an entrepreneurial mindset?  The main lesson about the ebb and flow of success and failure is profound:

Fame! You’ll be famous as famous can be,
with the whole wide world watching you win on TV.
Except when they don’t.
Because, sometimes, they won’t.
I’m afraid that some times
You’ll play lonely games too.
Games you can’t win
‘cause you’ll play against you.

Entrepreneurial A-Ha: The road to your destiny is paved with good days and bad ones; successes and failures. And sometimes your worst enemy will be yourself. (TWEET!)

Another great passage for entrepreneurs:

You can get so confused
that you’ll start into race
down long wiggled roads at a break-necking pace
and grind on for miles across weirdish wild space,
headed, I fear, toward a most useless place.
The Waiting Place…
…for people just waiting
Waiting for a train to go
Or a bus to come, or a plane to go
…or waiting around for a Yes or No
—or waiting perhaps for their Uncle Jake
or a pot to boil or a better break.
Everyone is just waiting.
NO!
That’s not for you!
Somehow you’ll escape
all that waiting and staying.
You’ll find the bright places
where Boom Bands are playing.

An eager little boy loves stars and dreams that one day he will catch one star to be his friend. Despite multiple worries and setbacks, he keeps trying new ways to make it happen…until in the end, his hopefulness pays off and his dream finally comes true, just not quite in the way he had thought.

The boy tried to jump up and grab it.
But he could not jump high enough.
So, very carefully, he climbed to the tallest tree he could find.
But the star was still way out of reach.
He thought he might lasso the star with the life preserver from his father’s boat.
But it was much too heavy for him to carry.
Perhaps he could get a seagull to help him fly up into the sky to reach his star?
But the only seagull he could find didn’t want to help.
The boy worried he would never catch a star.

Entrepreneurial A-Ha: Never give up your dreams because success comes in many forms. (TWEET!)

A little boy discovers a small patch of abandoned garden in his otherwise dreary industrial city and–through trial, error and love­–helps it thrive, thus transforming his community. The most poignant passage talks about the power of contributing what you can, however you can and learning as you go.

Liam may not have been a gardener, but he knew that he could help. So he turned to the railway the very next day and got to work. The flowers nearly drowned and he had a few pruning problems, but the plants patiently waiting while Liam found better ways of gardening. As the weeks rolled by, Liam began to feel like a real gardener and the plans began to feel like a real garden.

Entrepreneurial A-Ha: Even if you don’t think you’re qualified to do something, with enough caring, learning and patience, you can create something beautiful. (TWEET!)