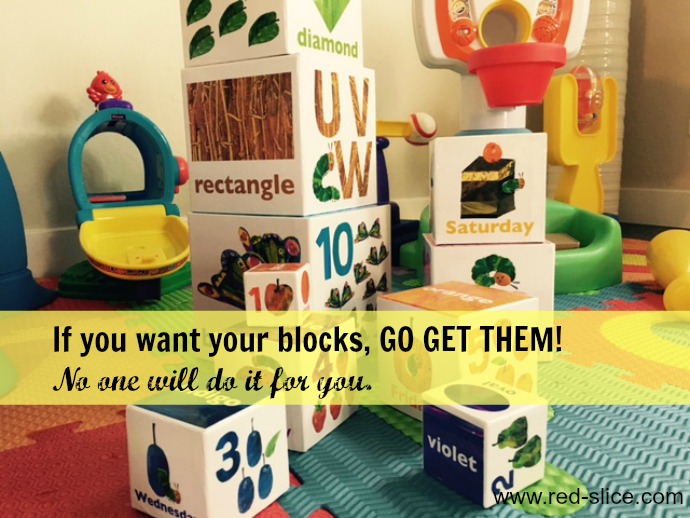 Kids teach us the craziest lessons.

My 20-month old son adores playing with these stacking boxes he got from his aunt. Ten colorful boxes adorned with letters, colors, shapes and animals provide endless entertainment. He is just now mastering stacking them from largest to tiniest, but for the most part shrieks in delight when I build a tower for him–only to topple it all down in a fit of giggles.

One day, he was in a particularly ornery mood (days which come more often as he approaches two). He was playing with the “blocks” as I call them (since he can’t quite say “box”) and, per usual, knocked them all down. Huffing in frustration, he sauntered over and scrambled onto the coach to pout.

He then realized he actially DID want to play with the blocks. So he started whining and pointing to them, as if I was his handmaiden and would bring them to his royal highness on his throne.

His response? He cried loudly and, in protest, jammed the square carrying case over his head, looking like a curious little robot. Muffled “harrumphs” emerged from the adorable box-head seated next to me.

You can’t pick your teachable moments.

“Honey, I know you’re frustrated,” I said. “But if you want your blocks, you can go get them–or you can sit there on the coach with your head in a box, kicking and screaming, and get nothing. Your choice.”

He sat fuming for a while, then slyly lifted one corner of the box from above his eye to look at me, grinned and then toddled off the couch to get back to his blocks again.

When you really, really want something–whether to build a business, write a book, speak on stage, act, sing, create, connect–no one will do the work for you, so you have two choices:

If you want your blocks, then GO GET THEM. Or you can sit on the coach with your head in a box, kicking and screaming, and get nothing. Your choice. (Tweet this!)