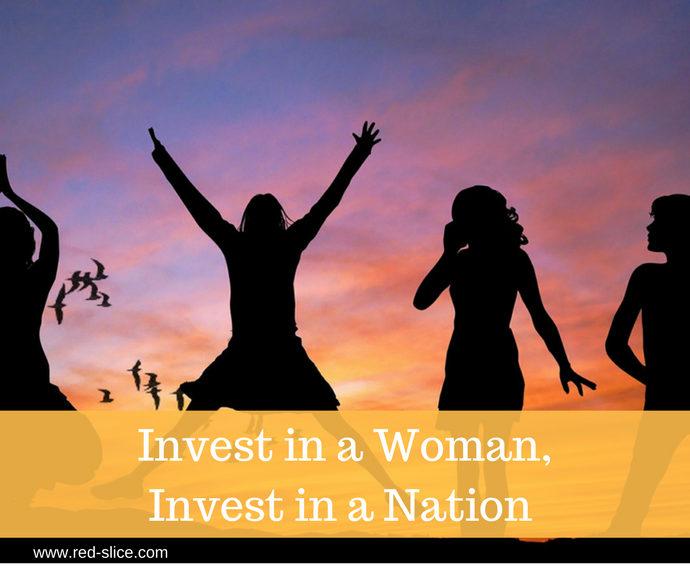 In case you were asleep, International Women’s Day was on March 8.  News outlets, celebrities and many brands trumpeted the news. It is officially women’s time to shine.

There is no denying that influential men and women are finally waking up to the fact that when women succeed, the entire economy benefits and society improves. Period. There’s plenty of data.

In fact, an Entrepreneur.com article states that if women-owned businesses disappeared in the U.S. today,” the Center for Women’s Business Research (CWBR predicts a loss of $2.8 trillion and a major blow for 23 million job-seekers, roughly 16 percent of the U.S. labor force. They discovered if society could access all the untapped potential these female-led companies possess, those businesses would have the possibility to generate $10 trillion in revenue (roughly three to four times greater than current numbers).”

Net net: When women succeed and lead, it creates a better world. (TWEET THIS!)

So when I received this fabulous email from Holly Ruxin, the founder of Montcalm TCR, I had to share it with you. Montcalm TCR is a San Francisco-based wealth management firm that supports smart, performing investments that also place an emphasis on innovative products, services and environmental and social practices. Holly has an extensive background in finance, having begun her investment career at Goldman Sachs. She later managed assets and led private client teams at Morgan Stanley, Montgomery Securities, and Bank of America.

We met because Holly and I are both Activators in SheEO, an innovative funding and support model for women-led ventures that create a better world.

Holly’s email re-ignited my optimism about women entrepreneurship and its global impact so she allowed me to share an excerpt with you:

I had the honor of participating in some amazing events last week in New York City in celebration of International Women’s Day and The Decade of Women launch.

40 Plus Years; Time is Now
Last week, executives and world delegates held an inaugural gathering at the United Nations to elevate International Women’s Day into the official launch of the Decade of Women. Hard to believe the United Nations began its Decade of Women program in 1976 to promote equal rights and opportunities for women around the world. Last week’s resounding message was “time has come to complete this mission”. Celebrated across eight billboards in Times Square, the Decade of Women is now live at www.decadeofwomen.org. It is bringing forth the #WeUniteWe pledge to complete the global equity revolution, an action-focused campaign specifically aligned with the United Nations’ Sustainable Development Goal #5 (Gender Equity) by 2030.

Abundance for All
Montcalm wholeheartedly supports Goal #5, along with all 17 United Nations’ Sustainable Development Goals (SDGs), by focusing on quality investments that also address human dignity, education and advancement, social justice, circular economies, and planet preservation. SDGs main purpose is to create abundance for all; Montcalm is proud to be part of this collaborative effort.

Synergy
When solving humanity’s problems becomes a necessity for everyone rather than a few, anything is possible. This was the bold energy and intention in everyone I met last week and everything we talked about over several days in various venues with a myriad of people across all aspects of financial investing, capital markets, not-for-profits, and social enterprises. Tenets of interdependence, long-term thinking, and profound collaboration are needed. When we base our thinking on these principals, we can create an infrastructure for more equality and higher standards of living for everyone.

“Invest in a Woman, You Invest in a Nation”
We are at a critical moment in history where we can continue down a familiar path OR create a better future for humanity. Our economic system needs improvement. It’s a two-dimensional model in which many pursue their own best interests whether intentional or unintentional, while leaving groups of people, women included, behind. We can embrace a system engineered to bring equality and sovereignty to all. Last week I saw private corporations, NGOs, the United Nations, financial service companies, and the investment community coming together to solve for this equation through collaboration. I am now more than ever convinced that we can effect great change!

Holly is right. We CAN affect great change.

As you know, my clients are passionate change-makers of both genders, but I’ve worked with an overwhelming majority of female entrepreneurs. It’s been my honor to support them and help their businesses thrive by providing clarity, focus and killer messaging that connects with just the right ideal customers. And my vendors and referral partners tend to be mostly women. Why? These are the people with whom I’ve networked. If you want to work with more women, you need to put yourself in places to meet more of the talented experts out there. Attend the right networking events. Participate in the right online forums and masterminds. Expand your circle.

Maybe serving a majority of women and referring business to even more of them is my little part to play in this movement.

You can be part of this renaissance, too. What are you doing with your business to support women entrepreneurs and change-makers?