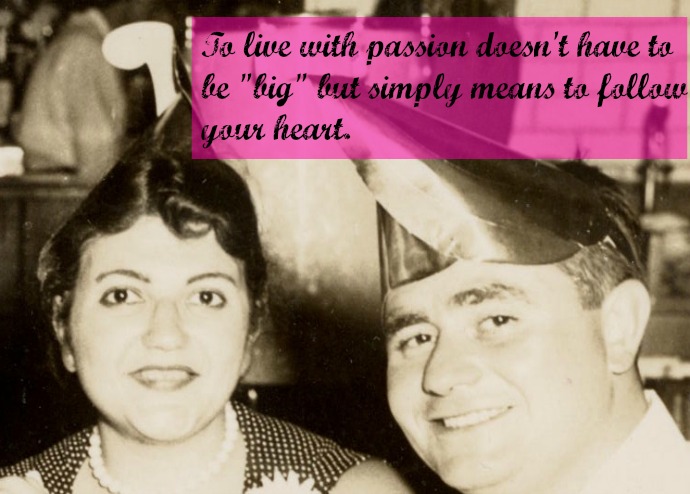 When it comes to the end of your life, will you look back with regret or gratitude?

Unlike other tasks you may be able to put off, the thing about regret is that you kind of have to plan for this question right now. You know, since you’re currently living your life.

Life is not a dress rehearsal, people.

My mom, Elizabeth, passed away on January 30, 2016. She was 85 years old. She died rather suddenly for someone who has been ill for a long time with heart failure. In the end, it was, oddly enough, not her heart issues, but pneumonia and then a hospital infection that turned into sepsis, which sealed her fate.

She passed away surrounded by family and especially her faithful husband of 61 years, my dad. Before she left this world, she knew her four kids were successful, healthy and loved. She knew her grandchildren. And yes, she even got the chance to see my baby boy, the last grandchild. Her life was full of family, friends, travel, and love.

We should all be so lucky.

I think mom’s only true regret was never having had the chance to go to college. When her youngerbrother ditched college to join the Navy, it was not even a realistic notion to use the money for my mom. What did girls need with a college education, thought my Italian immigrant grandparents? Mom even told my brother a story about being scared when, as a young girl, she almost lost some library books, “ I mean, I was petrified. Mom didn’t even think girls needed to be reading in the first place.” Can you imagine?

She married at 24, but mom still worked. She was a legal secretary/office manager for many years before her kids came along later in life and the worked part-time off and on, focused on raising her family.

I always thought my life was so different from hers. Part of that was by design: My mother wanted me to have all the educational opportunities she never had. She wanted me to stand on my own two feet and not have to rely on any man for anything except love.

But when she made sacrifices for me, I don’t think she realized just how different it would make our lives. I was a single girl focused on my career, living in the city for many years. I broke off an engagement in my late twenties and didn’t get married until my early thirties. I moved far away from home. I had adventures (and misadventures) my mom probably never imagined.

I rebelled so much against the traditional path that my mom, deep in her heart, would have liked me to follow. While she wanted me to have all the opportunities, in the end, I believe she wanted me to choose her path simply because she knew how happy it made her. When I didn’t, she wasn’t sure what to make of me. I wanted to follow my passions and I thought she just couldn’t relate. But, boy, was she proud.

Now, I realize how much her life was the lesson I needed all along. I see now that Mom followed her heart. She lived with few regrets. (Tweet)

She may not have blazed career trails or invented things to live her passion. But, that is because those were not her passions. Hers were different and, yes, she pursued them with gusto. She went on an epic cross-country road trip with my dad before they had kids. She enjoyed Caribbean cruises and Canadian casino bus trips. She traveled to Italy several times and kept in constant touch with family there, helping us kids forge relationships between our generation of cousins as well.

She read (voraciously). She went to every social gathering, party and picnic. She led clubs and volunteered at PTA, standing up to the administration on policies that she thought hurt her kids.

She cheered on her favorite football teams. She cooked giant holiday feasts and crowded as much family as would fit around the table.

When she couldn’t have kids after years of trying, she never gave up hope. Then she had my brothers in her late thirties, a ridiculously late age back in 1966. And then me, six years later, at age 42. She hustled. She got me and my older brother into acting as kids and shuttled us all over Manhattan. She knew exactly what we all wanted for Christmas–and I have no doubt shopped for and wrapped most of it herself

She raised a family and gave us a magical childhood of simple pleasures: boisterous holidays, family vacations, a modest summer house in Mastic Beach, Long Island (seriously, NOT The Hamptons!), full of lazy summer afternoons spent reading, feeding swans, swimming, and boating–no camps or video games! And, of course, warm summer nights where fireflies lit up our games of Tag in the backyard.

She moved from NY to Ohio in her early fifties to start a whole new life when my dad’s company relocated us. She nursed both my grandmother and my great-aunt in their ailing old ages until they each passed away.

My mom’s health was deteriorating over the past few years. It was always a tightrope when I returned home from visits there. Would this be the last time? One can never be sure. So it was always, “I love you” before every parting, at the end of every phone call.

I stayed home a little longer than usual this past Christmas, a full week which then got extended due to cancelled flights and bad weather. Maybe the Universe knew?! I made sure she got to watch my little one play in her living room for a few hours. She was not the most talkative or “herself” in recent years but it was enough to be in her presence, making small talk. I gave her an extra big hug and kiss upon leaving, and made sure my one and a half year-old son did the same. “Say ‘I’ll see you soon, Nonnie’,” I encouraged him. She loved hearing him say “Nonnie” in that sweet little baby voice of his.

Did Mom have other regrets? I’ll never know for sure. But in the last few weeks, I’ve realized that her life was one big adventure of enjoying the people and moments that mean the most. A life I always thought so different from mine. And yet…. she followed her own passions just as I want to follow mine. Exactly the kind of life I want as well. One big adventure. Soaking it all in.

So I ask you: Today, at this moment, are you setting up your life to do the same? Are you launching that business, writing that book, taking that trip, or simply spending time with the people who matter most?And remember, like my Mom, living a life without regret is not about “living hard” or doing crazy, epic things, either, unless that’s truly what calls to your soul.

Are you following the passions close to your own heart or simply living a life others say you should have? Are you measuring your success with someone else’s yardstick?

At the end, when it’s all said and done, no one will care about your course launches or “six-figure business” or book deal or social media followers or marketing to-do list. My mom never had any of those things and she could have cared less. She was just fine.

In the end, are you going to have no regrets, just love?